Skip to content
Previous Next
Tim O’Brien: The Things They Carried 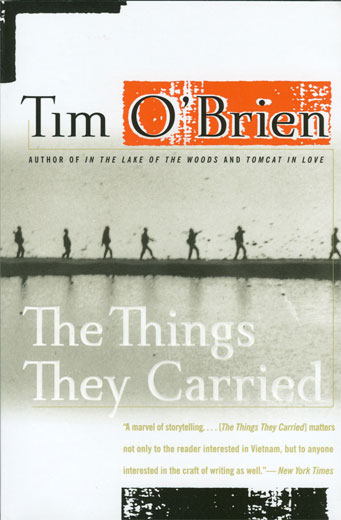 I discovered The Things They Carried years ago after reading its title piece, the short story “The Things They Carried,” which could stand alone and is widely anthologized by itself today. The book itself is a compilation of 22 short stories, but that’s somewhat misleading; The Things They Carried is a single work that should be approached as a whole. Indeed, it is the way the stories work with each other that makes them so effective. After a request from Max Cairnduff, I decided to revisit this great war novel to review it here — it is, after all, one of my favorites.

While this book is marked as fiction (indeed on the title page it says “A work of fiction”), that is apparently only partly true. O’Brien grew up where some of the characters grew up. He went to Vietnam and was involved in many of the events depicted in the novel. By categorizing what could be his memoirs as fiction he is not just avoiding the problems that have arisen recently with memoirist who like to put somewhat of a spin on their life. That what he’s written here, though it didn’t happen, is just as true as what did is part of the point of the book. But more on that later. Let’s start by looking at the title story, before it all gets complicated by “truth.”

On its own, the short story “The Things They Carried” is an excellent — probably one of the best — works of fiction about war (though I have never been to war and cannot vouch for that part of it). It’s incredibly detailed with little monotonous facts.

As PFCs or Spec 4s, most of them were common grunts and carried the standard M-16 gas-operated assault rifle. The weapon weighed 7.5 pounds unloaded, 8.2 pounds with its full 20-round magazine. Depending on numerous factors, such as topography and psychology, the riflemen carried anywhere from 12 to 20 magazines, usually in cloth bandoliers, adding on another 8.4 pounds at minimum, 14 pounds at maximum. When it was available, they also carried M-16 maintenance gear — rods and steel brushes and swabs and tubes of LSA oil — all of which weighed about a pound. Among the grunts, some carried the M-79 grenade launcher, 5.9 pounds unloaded, a reasonably light weapon except for the ammunition, which was heavy. A single round weighed 10 ounces.

This partially disinterested manner of presenting details works a devastating tone when O’Brien leads into the next sentence:

The typical load was 25 rounds. But Ted Lavender, who was scared, carried 34 rounds when he was shot and killed outside the Than Khe, and he went down under an exceptional burden, more than 20 pounds of ammunition, plus the flak jacket and helmet and rations and water and toilet paper and tranquilizers and all the rest, plus the unweighed fear.

The piece is wonderfully balanced. As you can see from the pull-quote, the beginning lists the many physical objects and their weight these soldiers are carrying. As the piece goes on, however, we see that they are carrying so much more.

Some things they carried in common. Taking turns, they carried the big PRC-77 scrambler radio, which weighed 30 pounds with its batter. They shared the weight of memory. They took up what others could no longer bear. Often, they carried each other, the wounded or weak. They carried infections. They carried chess sets, basketballs, Vietnamese-English dictionaries, insignia of rank, Bronze stars and Purple Hearts, plastic cards imprinted with the Code of Conduct. They carried diseases, among them malaria and dysentery. They carried lice and ringworm and leeches and paddy algae and various rots and molds. They carried the land itself — Vietnam, the place, the soil — a powdery orange-red dust that covered their boots and fatigues and faces. They carried the sky. The whole atmosphere, they carried it, the humidity, the monsoons, the stink of fungus and decay, all of it, they carried gravity. They moved like mules.

Though at this point it might appear so, this is not just a long list: each soldier in the troop, though given only a short space, is brought to life by the detail that O’Brien uses to describe what that soldier is carrying. And particularly Lieutenant Jimmy Cross, who feels guilty about the death of Ted Lavender, is brought to life in poignant ways. The story drifts around like a dream — or, rather, like a delusion brought on by fatigue.

Forty-three years old, and the war occurred half a lifetime ago, and yet the remembering makes it now. And sometimes remembering will lead to a story, which makes it forever.

The stories begin to intertwine with one another as O’Brien then takes the reader into a great metafictional treatment of the memoir and especially of writing about war. O’Brien makes a distinction between “story-truth” and “happening truth,” saying at one point that “story-truth is sometimes truer than happening-truth.” As he explores the nature of story telling, O’Brien freely contradicts events as portrayed in an earlier story, and then sometimes goes on to contradict his contradiction. Though this is a book about his own experience, he remains as elusive as Philip Roth does in the Zuckerman novels. We don’t know who O’Brien is. But that’s not the point. What we are getting here is an attempt to say something truer than his simple memoir could be, something that adopts the contradictions we find in life when we really stop to think about things.

So, as you probably can see, though this is a book of short stories, it really should be read in its entirety and from start to finish. Though this was a revisit for me, it was still very profound and affected me as much — or more — this time as the first time I read it.

At one point O’Brien writes the following:

A true war story is never moral. It does not instruct, nor encourage virtue, nor suggest models of proper human behavior, nor restrain men from doing the things men have always done. If a story seems moral, do not believe it. If at the end of a war story you feel uplifted, or if you feel that some small bit of rectitude has been salvaged from the larger waste, then you have been made the victim of a very old and terrible lie.

I’m not sure if I’m a victim of the lie or not, but O’Brien’s work here is definitely a masterpiece, something that uplifts even as it shows the ugliness and absurdity of war. The Things They Carried was a finalist for the 1991 Pulitzer Prize, which was won by Updike’s Rabbit at Rest. It’s almost too bad both books were published the same year because The Things They Carried just might be the most valuable piece of literature to come from the Vietnam war, and it deserves the timelessness a Pulitzer can bestow.

Out today from Archipelago Books, Hanne Ørstavik’s The Pastor, translated by Martin Aitken. I just got this so I’ve only read about twenty pages, but it’s hooked me! Ørstavik’s Love won the 2019 PEN Translation Prize, and The Pastor feels just as worthy!⠀⠀⠀⠀⠀⠀⠀⠀⠀
Check out the new paperback edition of H.G. Wells' The War of the Worlds, from NYRB Classics! It's one of their few editions with a non-comforming cover, and I love it (notable that a few of the other non-conforming editions also sport the art of Edward Gorey).
Out today from NYRB Classics, Jean Giono’s The Open Road! This will go along nicely with the other Giono books released, including Ennemonde, which was just released by the wonderful Archipelago Books! I have loved what I’ve read of his work, and I’m really excited for both The Open Road and Ennemonde, which are next up in my reading lineup!
📚List of Betterment! 📖⠀⠀⠀⠀⠀⠀⠀⠀⠀
I started Eric Jager’s The Last Duel over the weekend after seeing that it is "A true story of crime, scandal, and trial by combat," and not just a dramatic piece of fiction that is now serving as the basis of a Ridley Scott film starring Matt Damon and Adam Driver (oh, and do I spy Ben Affleck in the cast as King Charles VI?).⠀⠀⠀⠀⠀⠀⠀⠀⠀
For those who assured me that Great Expectations becomes un-put-downable, thank you for the encouragement! I found myself trudging through the first bit of volume two while Pip is getting his footing in his new surroundings, and that was a bit discouraging after such a wonderful first volume. But I am loving it again!⠀⠀⠀⠀⠀⠀⠀⠀⠀
This arrived today and it looks excellent! Lemon, by Kwon Yeo-sun and translated by Janet Hong, is coming from Other Press on October 26! They couch it as "Parasite meets The Good Son," and the first page has me captivated already (swipe to see it).
Toggle Sliding Bar Area
Loading Comments...
Go to Top