Skip to content
Previous Next
M.T. Anderson: The Astonishing Life of Octavian Nothing: Traitor to the Nation, Vol. 1 – The Pox Party 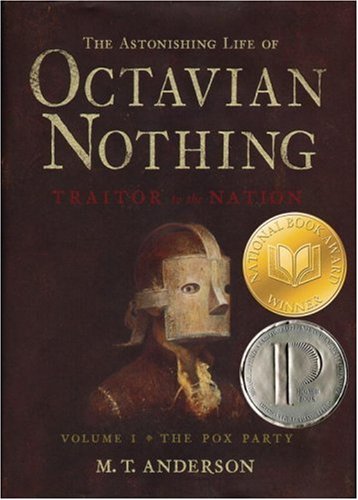 I don’t know why I shy away from Young People’s literature. Well, perhaps I do at least know my own assumptions — potentially puerile content, gimmicky plot structures, facile resolutions, reputation (mine), and, worst of all, the tendency to dwell on the surface with no subtlety as it pushes platitudes into young minds. But it seems that the ones I do pick up are very worthwhile. This suggests my assumptions about this category of books are probably unfounded and need revision — they are certainly unfair. I’ve been surprised in the past to find these books are often more experimental, more provocative, and more profound than much of the fiction I usually read. Octavian Nothing is no exception.

I chose to read this one almost on a whim (a good whim). The 2008 National Book Award (which Octavian won in its year) had recently been awarded, and I like American history, particularly the Revolutionary War. Also, the back of the book compelled me by speaking of some mysterious “experiments.” And, being a Young Person’s book, the price of the volume was fairly low. That’s about all I knew or considered when I took the book to the counter to pay.

At the beginning of the book, we come to know a strange and yet strangely appealing 18th-century group of rational philosophers living around Boston in the late 1760s and early 1770s. Our young Octavian is being raised by these scholars, philosophers, musicians, scientists, etc. Consequently, for the second blog post in a row, we have a surprisingly sophisticated voice telling the story, this one from the 1770s with unstrained floridity.

The men who raised me were lords of matter, and in the dim chambers I watched as they traced the spinning of bodies celestial in vast, iron courses, and bid sparks to dance upon their hands; they read the bodies of fish as if each dying trout or shad was a fresh Biblical Testament, the wet and twitching volume of a new-born Pentateuch. They burned holes in the air, wrote poems of love, sucked the venom from sores, painted landscapes of gloom, and made metal sing; they dissected fire like newts.

Octavian’s mother is a queen, and he is treated as a prince. As such, his is a charmed life: he has servants and he is trained in all of the arts and sciences. He loves learning, and he excels in all of his subjects.

However, Anderson does an excellent job at developing this innocent and idealistic upbringing while giving glimpses at the more sinister side. For example, there is a strange manner of appellation: The head of the house is Mr. Gitney, but he’s called 03-01 (01-01 is the “glorious majesty the King — the initial 01 signifying His Majesty’s family, the House of Hanover.”) There are strange rooms and strange commentary offered by the servants. There are even slight intimations from those teaching him. It’s haunting, really. It turns out Octavian is unwittingly part of an elaborate experiment (a type of experiment that actually took place!), and, as he always knew unconsciously, his life was very different from the life of those around him and even different from what he’s been brought up to know.

In the years as I grew, my mother must have perceived the peculiarity of our situation; but though she may have noted, she did not discover its irregularities to me by word, look, or gesture.

Or, by God — I reckon now, now that it is all gone — yea — mayhap she did discover it to me, in every gesture, in all looks, in the space between each word — and I, never knowing her elsewhere, did not know how to parse her warnings and subtilty.

How would her smile have appeared, did we not live in that house?

Now, I’m a fan of approaching a book knowing next to nothing about its content. While I’m not going to disclose any major spoiler here that isn’t disclosed in the first fifty pages (or on the cover, for those who pay more attention to it than I did), in the course of this review I am going to discuss briefly the nature of those mysterious experiments. For me it was fun to have my knowledge of the experiment come together in the first few pages of the book, so some of you might want to take my recommendation of this book at face value and, without further word, go read the book — avoid the minor spoilers herein.

As I said earlier, this book portrays an ugly reality in a way a young adult could understand, but still with the type of subtlety that makes literature so provocative and poignant even to adults. Octavian Nothing is a black boy. His mother was indeed a princess in some lost African tribe, but events were such that she became a slave when still very young and pregnant. Fortunately, or unfortunately, she was bought by these rationalists who have treated her and her son as royalty all in an attempt to discern the intellectual capacity of the African. This type of experiment actually took place, though Thomas Jefferson, for one, didn’t think such experiments were called for; he thought it plain enough that the blacks were of inferior intellect (yet, apparently there was something in them that attracted him — read Annette Gordon-Reed’s National Book Award winner for nonfiction The Hemingses of Monticello). Notwithstanding public sentiment, Octavian is given an outstanding classical education which he adores. He is an accomplished violinist, and his mother plays the harpsichord masterfully. He’s content. In the first part of the book, Octavian gradually becomes self-aware, and the pending doom of the Revolutionary War as well as the glorious ban on slavery in England after Somersett’s Case affect the atmosphere in which young Octavian comes of age amongst rationalists funded by distant investors with their own interests.

One thing I like about National Book Award winners is that they don’t receive the same type of criticism and censorship as, say, Newberry winners when they include material that some might say is inappropriate for young adults. Despite the YPL categorization, this book dwells on a very brutal subject without shying away from some of the shocking violence — or adultness. For example, while there is no explicit sexuality in the book, given the chance, Anderson allows his characters to speak truly:

“This is no banter, sir. This is no game.” I could hear the fury in her voice. “This is no jest, no frolic, no badinage. I was a princess, once; I am a princess still. Royal blood will mix only with other royal blood. Otherwise, it demeans the line. Tell me what nation you offer me, what alliance, what regal house — or leave.”

Still in a tone of play, he said, “My lady, you know what scepter I offer, and what orbs.”

It’s my biased perception that most censors wouldn’t know what this man was saying, but if they did, and this book were a Newberry winner, there would be a giant hullabaloo. The book would be banned; parents and librarians would march without ever having read the book. That is not to say that the winners of the National Book Award for Young People’s Lit are filled with adult humor and adult situations, but they do seem to manage to allow their characters to develop in realistic situations without being confronted with the same ire that accosts Newberry winners.

Back to the book: Anderson’s style throughout feels incredibly faithful to a voice from the time period while still managing to be accessible to, well, young adults. He uses words and syntax that are no longer common, but it never feels gimmicky or strained. With this, he manages to create a wonderful, complex atmosphere that encapsulates the lightness of youth giving way to the onslaught of experience and the incredible historical events of the time. It is at times lilting and at times haunting. For example, here is a scene from the pox party that reminded me of Edgar Allen Poe’s “The Masque of the Red Death”:

I watched them dance before me — the young and the wealthy, their parents, full of knowledge of the ways of trade and profit — delicate in the light of candles and fire — while behind them, the metal orbs or Mercury, Jupiter, Venus, and Sol hung unused from their orrery gears, and in their cages, the racoon and serpent surveyed the hornpipe frisking with superstitious gaze; a skeleton was hanging, face turned to the wall; and while those dainty dancers skipped it on the polished floor, they brushed against engines that could produce the sparks of electrical virtue that brought thunder and lightning battering from the skies.

In the first fifty pages I highlighted many passages for my own memory or for this review. However, as the book went on, it impressed me more and more. As Octavian became more self-aware and more mature, the style seemed to match his growth (not that it was juvenile to begin with). I was particularly enthralled by the first part of the last section when Octavian uses classic philosophy — the teachings of his mentors — both to explain his plight and to prove his mentors wrong. It is rich in that biting irony that is more dumbfounding because it is still there today. Definitely a treat to read, even as it becomes more and more a moral indignation novel.

As the title makes known, this is the first book in a series. I have not looked at the second one, which was released recently, and I have no idea how long this one will go. (Have any of you heard how long Anderson plans to go with this?) I’m pleased to announce, however, that even as Anderson introduced new characters and plot turns into this volume, the tone continued to feel intimate. I never got the feeling that I simply read the introduction to a dissertation on lofty themes. The lofty themes are there, but the characters don’t become mere vehicles for expressing the themes in epic form.