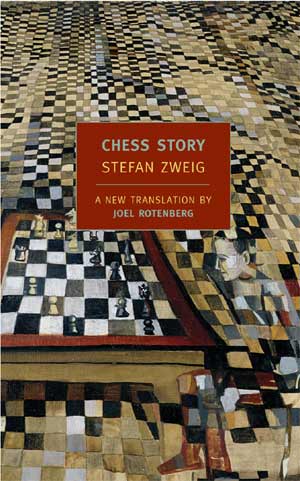 Here’s a short one (hardly a novella, more than a short story) that didn’t stay long on my “currently reading” list but will make its way there again. Stefan Zweig’s Chess Story (Schachnovelle, 1942; tr. from the German by Joel Rotenberg, 2006), published after Zweig and his wife committed suicide in Brazil, “one of Hitler’s posthumous victims,” said Peter Gay in the introduction to the NYRB Classics edition. I’m not well informed about Zweig’s life or work, but it’s time I learned, and I’m glad to say I’ve begun. Before we begin the review, though, I want to highlight this magnificent cover, which features a fitting detail from The Chess Game, a painting by Vieira da Silva.

Chess Story begins and ends on an ocean liner going from New York to Buenos Aires. The narrator discovers that Mirko Czentovic, the world champion chess master, is on board. Czentovic has an intriguing story. Raised by a priest, he was basically forsaken as a child because he had no visible intelligence. He never learned how to spell or how to interact with people. But he watched the priest play chess and, for some reason, chess stuck. When the priest found this hidden skill he compared Czentovic to “Balaam’s ass!” Lacking most other skills, Czentovic quickly rose to become the best in the world, and with that rank came no little amount of pride. The narrator wants to meet Czentovic to attempt to understand him a little better.

Interestingly, Czentovic is not the book’s true subject, as I was led to believe at first. While the narrator and some other men are together playing against Czentovic, out of obscurity comes Dr. B, who helps the men achieve a draw with the chess master. The men immediately say that he must challenge the world master in a game just between the two of them. As it plays out, Dr. B is a man with an even more interesting story story than Czentovic, but he hasn’t played a proper game of chess in over twenty years.

“You see,” he added with a pensive smile, “I honestly don’t know if I can play a proper chess game according to all the rules. Please believe me, it was absolutely not out of false modesty that I said I hadn’t touched a chess piece since grammar school — that was more than twenty years ago. And even then I wasn’t considered a player of any particular talent.”

Yet Dr. B has come to know the game in a way that Czentovic never could. How Dr. B. came to learn chess is the main story here. Where Czentovic became proud and cold, Dr. B’s knowledge changed him in a different, more fundamental way. And in telling Dr. B’s story, Zweig indicts Nazi Germany. With a pace that keeps winding and winding in tighter and tighter circles, Zweig propels his story to its pleasing, disturbing denouement.

This is my first encounter with Zweig, an Austrian writer who apparently was one of the world’s most recognized and respected writers in the early 20th century. I have Beware of Pity on my shelf and anxiously wait to read it.

I first read The Westing Game in December of 2006. My oldest son had just been born, and pretty much ever since I’ve been looking forward to reading it to my kids. We finally did! There are four boys now, ranging from 15 to 6, and we had a blast with the puzzles and riddles in this wonderful book. I didn’t remember the plot well at all, so in many ways for me it was like discovering the twists and turns for the first time.⠀⠀⠀⠀⠀⠀⠀⠀⠀
On weekends I often ask folks to let me know what they're reading, and I love sharing the responses! One book has been featured regularly over the past month: Olga Tokarczuk's The Books of Jacob, translated by Jennifer Croft. It came out in the UK last month and is coming out from @riverheadbooks here in the US at the start of February. I was fortunate enough to get a copy, so this I what I'll be reading this weekend. And, from the page count, it is what I'll be reading for a few more weekends to come!⠀⠀⠀⠀⠀⠀⠀⠀⠀
One of my goals for 2022 is to read at least one book of poetry per month. What better place to start than with Louise Glück’s most recent collection, Winter Recipes from the Collective?⠀⠀⠀⠀⠀⠀⠀⠀⠀
Time to sit back with an old favorite! Truman Capote’s A Christmas Memory. The story of Queenie and Buddy, best friends separated by around 60 years, at Christmas warms my heart! #trumancapote #achristmasmemory
Joan Didion’s work is deep and important. I’m sad to hear of her death, and I’m grateful she did so much during her life to investigate and articulate so many of our most personal human experiences. #joandidion
For lovers of nature writing (and lovers of writing in general), The Library of America has published a beautiful volume of Rachel Carson's The Sea Trilogy, featuring Under the Sea Wind (1941), The Sea Around Us (1951, and winner of the National Book Award), and The Edge of the Sea (1955).
Happy publication day to Elizabeth Taylor's Mrs Palfrey at the Claremont, coming out in a lovely edition from NYRB Classics! Elizabeth Taylor is one of my pantheon authors, and this is one of my top ten reads of the year, as I discuss with Paul in our favorites of 2021 episode. It's a fantastic book. It starts in winter weather, too, so while not particular festive for the holidays it is still a great book to start in these darker days.⠀⠀⠀⠀⠀⠀⠀⠀⠀
Toggle Sliding Bar Area
Loading Comments...
Go to Top