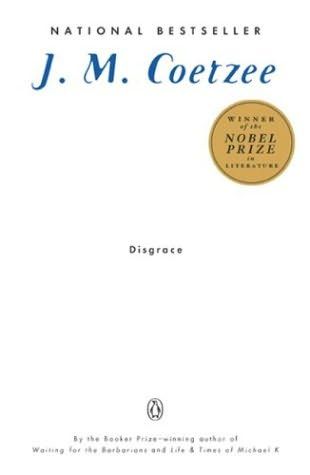 When Coetzee won the Nobel Prize in Literature in 2003, Disgrace was the first book I bought by him. Though it was short, it took me a long time to open it up and begin to read. Years in fact. When I finally did begin reading it, I consumed it in less than one day, a busy day at that.

Disgrace is a very quick read. But it’s not quick just because it’s short (though it is short); it is a quick read because Coetzee’s writing is sweet and simple. I don’t remember getting tied up by a single sentence. Its simplicity on the surface is even more impressive when considering the complexity — all the allusions, all of the conflicted feelings — that is actually going on. As an example of how fast this book can move and yet how much goes on in the lines, anything I disclose in this post takes place in the first thirty pages — and so much happens in those thirty pages, so many emotions that affected me viscerally.

The novel opens up when David Lurie’s prostitute stops meeting with him. He’s caught a glimpse of her outside the hotel room where they met weekly and where, until now, they’ve had a great relationship. He wants to console her, tell her that he understands:

He is all for double lives, triple lives, lives lived in compartments. Indeed, he feels, if anything, greater tenderness for her.

But she cannot deal with the fact that a client has seen her in her daily life, so she drops him. His week becomes “as featureless as a desert.” He seeks to assuage his libido (let alone his ego) by seducing one of his students. It is one of the most painfully compelling sections of a book I’ve ever read. In a way I felt guilty for reading it, like I was somehow involved. That sick feeling of guilt and desire radiates from the page. It’s an unpleasant thing to experience, especially when Coetzee inserts cold reason.

He is vexed, irritated. She is behaving badly, getting away with too much; she is learning to exploit him and will probably exploit him further. But if she has got away with much, he has got away with more; if she is behaving badly, he has behaved worse. To the extent that they are together, if they are together, he is the one who leads, she the one who follows. Let him not forget that.

And this is just the first thirty pages. The real force of the book comes after this, when Lurie moves away to live with his daughter on her farm. There is more disgrace to come.

David Lurie is a character to be despised — at least, that’s what I wanted to do. I couldn’t fully despise the man though. Somehow I could not help but pity him and feel somewhat complicit. Underneath the cold, selfish skin, there was a real human being. I don’t quite know why. I admit that I have not fully informed myself of the criticism this book takes from those who purport to know about South Africa and race relations post-apartheid. I’m not sure how I’d feel about it if I knew more, but as I stand now, it is a book to be read for its stylistic, stark beauty and for its substance.

I leave this review with a few questions here, about various matters.

What is the connection with the animals? That was an aspect that I didn’t particularly care for honestly, but maybe I just didn’t get it. Even though I pitied the animals, it was in no way sufficient for me to associate that pity with anything I consider more important.

I can see some reasons why Lucy was so passive about her rape and her assaulters. But I know this offended a lot of people. How does it fit in the larger picture of the book? Her passivity and the somewhat redemptive ending do not seem to mesh in my mind.