Skip to content
Previous Next
Linda Grant: The Clothes on Their Backs 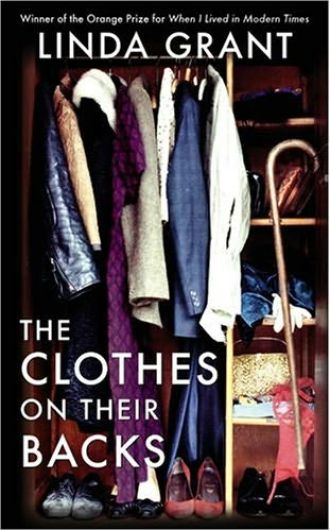 Actually, before you even read my review, I’d like to give a little plug for The Book Depository, which I found out about when I followed the link in Mark Twaite’s name in my post on Coetzee’s Life and Times of Michael K. (Mark Twaite is the Managing Editor at The Book Depository). I had the eight longlist titles available in the U.S., and didn’t know if I could really justify buying the rest from the UK and paying shipping, etc., especially when the books so far have not been that great. But The Book Depository offers free international shipping, and their prices are excellent, too, even with the exchange rate. In fact, some of the books were as cheap as if I waited for them to be published in hardback in the U.S. So, now, on to the review of The Clothes on Their Backs (2008), which I wouldn’t have yet if not for The Book Depository’s great service!

Linda Grant is a new author for me, though I’ve seen her name pop up now and then, usually in reference to When I Lived in Modern Times, which won the Orange Prize in 2000. I wasn’t all that anxious to read this book, truth be told. The title, for one thing, did not appeal to me; looked like a heavy-handed metaphor. But I guess I’m going to have to approach more books this way. The books on the longlist that I wasn’t anxious to read have turned out to be the most enjoyable, including this one.

The narrator is Vivien, is a twenty-five-year-old in London in the 1970s, when most of this novel takes place. She has moved back in with her parents while in a state of depression following a tragic death:

You take a misstep, you turn your head the wrong way when you cross the road, you gargle with bleach instead of mouthwash, it’s just ridiculous the doors that are slightly ajar between life and death.

Still in the slump of depression but looking for a way out, Vivien runs into her uncle, Sándor Kovacs, whom she has met only once before back in 1963, when he came to visit her father, his brother. Her father threw him out — actually refused to even receive him — and she didn’t see Sándor again until this meeting in the 1970s, though she heard about him in the news frequently enough when he went to prison a few months after showing on her doorstep.

When they meet again in the 70s, Sándor is getting old. Thinking he doesn’t recognize her, she gives him a phony name and begins to work for him, transcribing his life story as he tells it. She goes into this despising the man, just looking for a bit of informaiton about her own past. For example, all she knows about her parents is that they were Hungarian and they came to London before World War II broke out, saving them from a lot of hardship, though, honestly, you wouldn’t know it to look at them. They keep to themselves and divulge nothing about their past.

“If anyone tells you about your grandmother it’s me.”

“So you could have asked.”

“And what would you have said?”

“Nothing! What’s she got to do with you?”

But Vivien is learning anyway. Through her sessions with her uncle, Vivien not only learns about her grandmother, she also learns about Sándor’s relationship with her father. I began to worry at about this point. Was Vivien just a vessle for Grant to write about the relationship between two Hungarian immigrants, one who got away before the war and one who did not? Happily, no. Vivien and her story remain distinct. And though her heritage is important, the novel maintains the focus on who Vivien is now (well, in the 1970s, at any rate).

Of course, from the first chapter in the book, which takes place thirty years after the book’s main events, we know that there’s more to the story. In that first chapter, Vivien runs into Eunice, her uncle’s girlfriend. Eunice somehow blames Vivien for Sándor’s death.

I have not forgotten our summer together, when I learned the only truth that matters: that suffering does not ennoble and that survivors survive because of their strength or cunning or luck, not their goodness, and certainly not their innocence.

The great thing about this book is that all of this plot doesn’t destroy the characterization. I like a good plot, but it’s always sad when an author lets the plot run over the characters, making the characters just a device to get across some clever twists and turns.

Something that never went away though was my dislike of the title. Sure, clothes are an important motif in the book, but to me it was only a motif, and not a particularly insightful one either. To me, the motif was more one to give the story some internal structure, and works much as in many other books. It was nothing new or interesting, and it didn’t feel like Grant wanted that to stand out too much because the motif was not particularly in my face in the book. In fact, without the title telling me to pay attention to clothes I think I would have to have read the book a few times before really appreciating the quantity of clothing connections. So I feel the title cheapened the book a tad, making something subtle the supposed center show. There is much more to this book than the title suggests.

So I enjoyed this book. Loved it? No. I doubt it will stick with me too long. But I appreciated it, especially in contrast most others on this blasted Booker longlist!

Support The Mookse and the Gripes on Patreon!